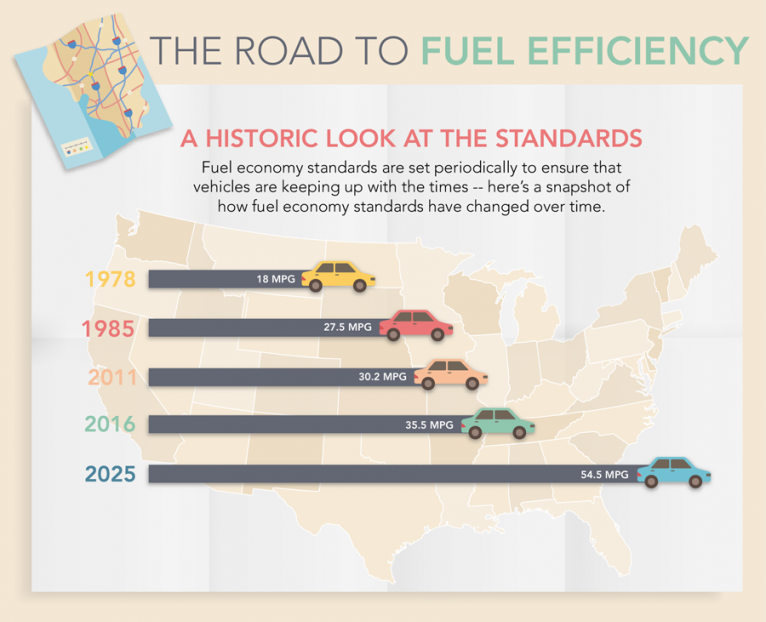 The Road to Fuel Efficiency

For many, refueling their vehicle can be disappointing. It’s the only activity where consumers watch the cost add up, dollar by dollar, quickly eating up disposable income. And much of that money goes right out the tail pipe — only 14-26 percent of the energy from fuel is used to move a vehicle down the road.

Fortunately, the Obama Administration’s new national fuel economy standards for passenger vehicles will improve vehicle efficiency and save Americans money at the pump, all while reducing our dependence on foreign oil and growing the U.S. economy.

Finalized in August, the new standards build on the Obama Administration’s first phase of fuel economy increases that raised the average fuel economy of passenger vehicles to 35.5 miles per gallon by 2016. Under the new rules, cars and light-duty trucks built for model years 2017-2025 are expected to achieve industry-average fuel efficiency equivalents of 54.5 miles per gallon by 2025 — nearly double the efficiency of cars on the road today.

These changes in vehicle efficiency will directly benefit consumers. By 2025 Americans can expect to save an estimated $8,200 in fuel costs over the lifetime of a new vehicle — or almost four years worth of gasoline costs for the average household. The standards will also help clean the air we breathe, reducing carbon dioxide pollution by over 6 billion metric tons.

While the standards are based on an industry average fuel economy goal, a manufacturer’s individual requirements depend on the vehicles it produces. This helps preserve consumer choice, meaning Americans can still buy the vehicle that best fits their needs. Consumers don’t have to wait until 2025 to start saving. They are already seeing more efficient vehicles in the showrooms as a result of President Obama’s first round of fuel economy standards, and consumers are responding positively.

Improving light-duty vehicle fuel economy is also one of the fastest ways to reduce our dependence on foreign oil, helping to build an American economy to last. When taken with the first phase of increases, the fuel economy program will save an estimated 12.2 billion barrels of oil, and by 2025 the standards will cut oil consumption by an estimated 2.2 million barrels a day. The fuel economy program alone with get us more than halfway to President Obama’s goal of cutting oil imports by a third by 2025.

Currently there is a wide range of technologies available to help automakers meet the standards, but achieving these historic goals will also encourage innovative new technologies and manufacturing. This innovation will spur economic growth and create high-quality domestic jobs. Employing 700,000 Americans, the auto industry is the lifeblood of U.S. manufacturing.

At the Energy Department, we are working to promote the innovation required to meet the new fuel economy standards, while making America more competitive and creating the jobs of tomorrow here at home. We are investing in groundbreaking research that will result in cars that have more efficient engines, weigh less and drive further.

Over the next few weeks, we will be highlighting companies and the technologies they are developing — with the help of the Energy Department — to reduce vehicle fuel consumption. Be sure to check on Energy.gov to learn about the advancements that will get us to 54.5 mpg by 2025.